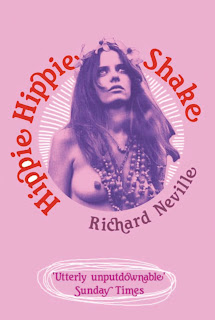 At the forefront of the underground movement of the 1960s and 70s, the satirical magazine and hippie handbook Oz stood as a monument to psychedelia and at its center was co-editor Richard Neville. In Hippie Hippie Shake, the “hugely enjoyable” (Time Out) memoir of the magazine’s radical history, coming in paperback this month from Overlook, Neville relives the dreams, trips, trials, love-ins, and screw ups of the era in an “entrancingly wicked account of the greatest decade ever” (Marie Claire).

To celebrate the release of the new paperback edition, featuring a chapter on the legacy of flower power a generation later, we chatted with Neville about the origins of Oz, sixties nostalgia, and youth culture in the age of social media. Check out the full interview below.

OP: The famous Oz obscenity case, which issue 28, “Schoolkids Oz,” was the subject of, was not the first time authority figures took issue with Oz; it caused trouble from its inception, with issue 1 leading to a court summons for “publishing an obscene magazine.” Did you mean for the magazine to get this sort of attention? Did you expect it to? What were your initial objectives when first imagining Oz?

RN: Oz magazine was launched in Sydney in 1963 by three students fed up with the deep dull conservatism of post war Australia. In our eyes, the somber oldies running the nation were stuck in the distant past, traumatized by the horrors of war, fearful of new ideas. Fine books with a raffish air were banned from distribution (DH Lawrence, Henry Miller, etc). European movies were censored and Australia’s indigenous people were banned from voting.

As the sixties dawned, a new generation kicked up its heels –TV, rock ‘n’ roll, drive-in movies and the contraceptive pill changed the culture. Oz mag did not specifically set out to flout the law. It was more a matter having fun and satirizing the establishment. Government dullards were furious and tried to jail us, but a new generation laughed in their faces and won the day. As the sixties unfolded life improved, and a new mood spread across boundaries. A Youth Quake. When the Berkeley Free Speech movement hotted up, we sent the protestors a bundle of Ozes. When the Beatles and Rolling Stones hit Sydney, our girlfriends slept with them. By 1967, Oz magazine had moved to London and the rest is history.

OP: What prompted and/or inspired you to delve into Oz’s dramatic history more than two decades after the zine’s final issue?

RN: In 1972 when the Oz trials ground to an end, I fled to America and immersed myself in the counter culture, just as it was slowly falling apart. Fun, travel, adventure was my goal and I eventually wound Oz down. In the eighties I re-settled in Sydney with my wife and we had two daughters, and I became a radical commentator on TV and in the mass media. In the early nineties I stumbled across a bunch of scrapbooks in the attic relating to the London Oz trials, and was amazed by the extent of its impact. Memories flooded back. It was time to spill the beans.

OP: The 60s are often viewed nostalgically, as a time of free love, great music, and revolutionary thinking. Do you think the media and society have created a skewed image of the period? Is there a darker, more complicated side to hippiedom that has been glossed over in the face of sentimentality?

RN: Yes, Hippiedom had its dark zones. Sexism was the biggest, as my daughters keep telling me. Feminism got going in the sixties but it took another generation before it started to seep in. Apart from that, rough types seized on the feathers and bongs to portray a cool attitude and disguise their motives. Stuff got stolen and pedophiles had an easy time. In the underground press, the funds could vanish in the blink of an eyelid. Peace and love could be turned on its head, as demonstrated by the antics of Charles Manson and the British maverick, Michael X, who “loved Hippies” and was hanged for manslaughter.

OP: Are you ever surprised by what is acceptable in publishing today compared to what was considered indecent and obscene in the 60s?

RN: These days it’s rather hard to be surprised by a book, any book, unless it’s truly brilliant.

OP: How do you think Oz would be received in today’s culture and by today’s youth?

OP: In a social media-saturated culture, the millenials are depicted as apathetic and too plugged in or, conversely, as starting Twitter and Facebook “revolutions.” Which depiction do you view as most accurate? How does 21st century youth compare to the hippies, zine makers, and revolution starters of the 60s?

RN: For reasons I don’t understand, I have not been drawn to the Facebook/Twitter “revolutions,” but I respect the impact such media has achieved in igniting the Arab Spring. Yet at the heart of these innovations lies a corporation. Also, according to Julian Assange, the files of Facebook pages remain forever on display in Washington for all the surveillance agencies to peruse at their leisure. How do the 21st century activists compare to Hippies, etc?  Much better educated, globally aware, savvy innovators, gadget crazy. Occupy Wall Street seemed so promising, yet it rapidly faded away. I’m sure it will be back.

OP: Your new afterword discusses the hippie legacy and its strengthening effect on 21st century ideas and ideals (i.e. an increase in global and environmental awareness). In your preface you say the grip of materialism on society might be loosening. Both these statements suggest hope for the future; have you sustained this optimism?

RN: My mood swings. Way back in the fifties, the French Situationists maintained that the project of capitalism is the annihilation of nature. From Rachel Carson’s Silent Spring to James Hansen’s latest blog, the warnings continue—mostly to deaf ears. Despite all that we’ve heard, the beat and the bling dazzles our senses. Most of us live out our days obsessing over the trivia of popular culture, while a minority can see the icecaps melting. We’re in a race between self-discovery and self-destruction. My last joint is hidden in a tree house.
at 1:57 PM

It’s great to hear that Richard Neville is still kicking the hive. He is one of the remaining sparks from the liberating fire of the free-loving sixties. Let’s hope the time for his last joint is still far in time. The world desperately needs minds like his to shed some light on why this brave new world is still swimming in so much crap.

"Guttenberg dressed in Day-Glo". Yup we're all a bit like that now days, and I'm not even a Hippie. The book is a smart&witty turn on - my third read -packed with holy truth bombs and impossible characters that took on the establishment and won, Like the pussy riots taking the piss out of Putin. There's a chilling mystery around the production of this radical tale ... like... WHAT HAPPENED TO THE MOVIE... featuring the brave&brilliant Sienna Miller , who stood up to Mad Murdochs thugs in the hacking scandal. Back then, HHS was just about to hit the screen, when suddenly it disappeared without a trace. WHY...HOW...WHO? Has anyone out there got a lead? Maybe Sienna could unravel the plot. Until then we've still got this delightful memoir.

Really very nice article. As well as helpful to gain knowledge about the Jewllery. Thanks to update us.

Am half way through Nevilles hilarious memoir, which is much more than a memoir, because it includes so many quintessential characters who challenged the status quo and won. Half radical, half perpetual love in, the British 60's opened doors for a new generation of post war teens to dance their pants off. The French, the Italians, the americans stormed the hot spots -Gerry Rubin, Abbie Hoffman, Gins-berg....hundreds, thousands sharing light fantastic and shaping the future.... until, puff! perverse denizens of the darkness shed their disguises and handed the earth to the corporate realms, alas. A spellbinding tome for all ages.

The Overlook Press
The Overlook Press is an independent general-interest publisher, founded in 1971. We publish nearly 100 new books per year, evenly divided between hardcovers and trade paperbacks. The list is eclectic, but areas of strength include interesting fiction, mysteries, history, politics, biography, drama, art, design, and illustrated gift books.

New in Biography and Memoir